Posted by 4 Eyed Animation Projects at 6:06 AM No comments:

Tony & The Doc In: the Doctor Is Out 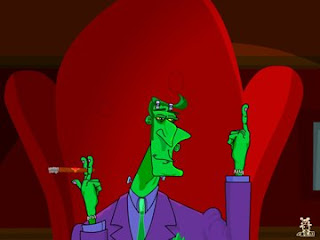 Posted by 4 Eyed Animation Projects at 8:51 AM No comments:

Paulie & Fly In: Save Me A Slice 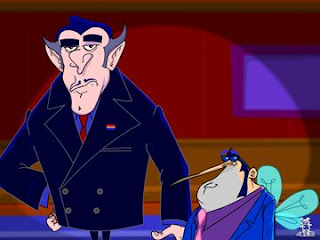 Posted by 4 Eyed Animation Projects at 8:49 AM No comments: 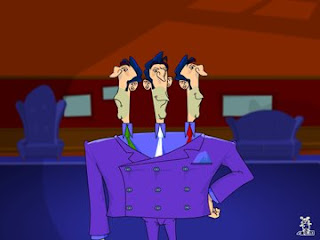 Posted by 4 Eyed Animation Projects at 8:29 AM No comments: 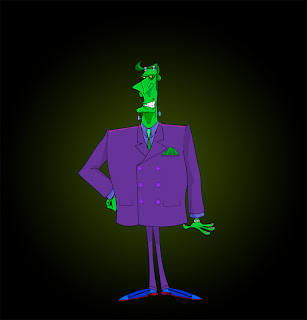 Tony Frankenello IS literally a made guy, who the Doc assembled from the best parts he could find. For instance he has Lucky Luciano's heart, Meyer Lansky's small intestine, Legs Diamond's legs, Joe Bonnanno's thyroid, and Jimmy Hoffa's spleen, hey he wasn't using it anymore! Tony takes over the family's business after Doc steps down, but relies on Doc's years of experience to help him through the tough spots. He's a good father and husband, concerned with providing his family with the finer things in life, a stern but benevolent leader and a times a raging paranoid monster, hey no one's perfect. Tony is also fiercely loyal to the Doc, who is a kind of like the father he never had. Doc is also like the goldfish he never had.
DOC FRANKENELLO 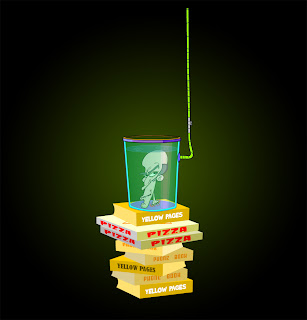 The Doc has been a round for quite a while. He graduated163rd in his class, from Bellevue College, Class of 1902. He was head cheerleader and led all the pep rallies for "the Fighting Straight Jackets" rah rah rah!, Doc moved to NYC and started his crime empire, 1st by controlling the city's funeral business, then the city's garbage business and then in a stroke of genius combining the 2! His contacts in the funeral business were invaluable in getting the inside track he needed to acquire the parts to make Tony, his greatest achievement to date. Doc is a life-long bachelor never having met (or for that matter made) "Mrs. Right", although he came very close with Loni Anderson.
PAULIE IMPALER 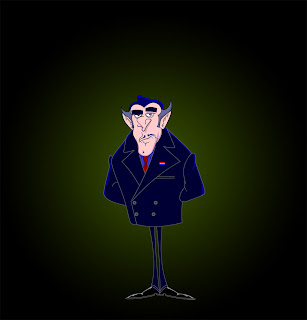 Paulie Impala acts as chief loan shark for the family. He likes to say he is the great great great great grandson of Vlad the Impaler (Dracula to you and me) from Transylvania, but then again who doesn't say that when they are trying to pick up women. Paulie feels slighted over Doc F.'s choice of Tony as new head of the Frankenello family's businesses, since he has seniority. He's been alive 442 years, and has more years of experience on the job than anyone except Dick Clark. Paulie is always plotting on how he can gain control of the family's interests...some people like to do sudoku, Paulie likes to plot.
JOHNNY 3 TIMES 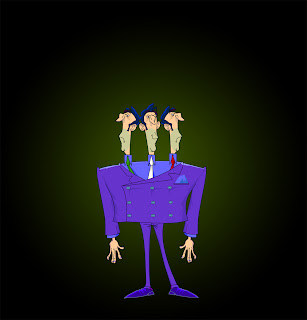 Johnny 3 Times are the family's chief triggermen, and a damn good one at that! Johnny is made up of equal parts of John, Johnny and Jonathan Tripliani, and sometimes he's his own worst enemy. The Johnnies have trouble seeing eye to eye to eye with himself, but in the end he usually seems to be able to pull himselves together and get the job done. J3T's not the men you want on your side in a battle of wits, but definetly the men you want in a pie eating contest. John was married briefly, Johnathan was the best man, but Johnny wasn't invited to the wedding...its a long strange story that I'll tell you sometimes.
SPIDER & FLY 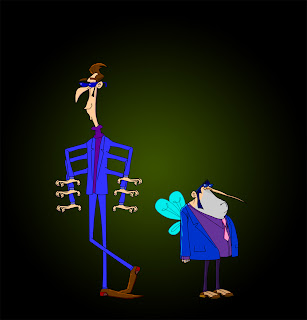 Spider is an experienced Frankenello family lacky, and no job is too dirty or stupid for this guy. Spider a natty dresser, who, as you can imagine, has a little trouble buying his clothes off the rack. Does his best work when teamed up with his BGF (Best Goombah Forever), Fly.
Fly has been in the family for a while. He started off in the sanitation business when he was nothing but a young maggot, and he has worked his way up the crime business food chain. Fly isn't the sharpest note on the staff, but he is dependable and loyal to Doc Frankenello. He may be a little dim, but Fly knows his shit.
LENORE FRANKENELLO
Lenore was built for Tony as his ideal mate. She is made up from parts from several sources; her body is from a Vegas showgirl, her brain from a librarian and her head from roller derby queen, quite a potent mixture. Lenore packs good looks, cunning, a beehive hairdo and a working knowledge of the Dewey Decimal System in her sexy 6' 4" frame. Lenore loves Tony and the kids with all her heart, whereever that may be.
THE KIDS TONY JR. & DEBBIE 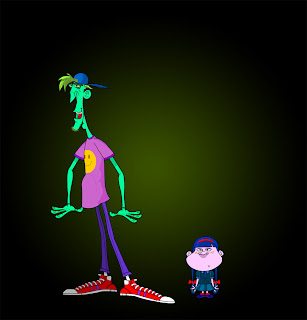 Tony Jr. is Tony and Lenore's only son. Handsome, talented, witty, these are all descriptive terms, none of which have the slightest thing to do with Junior. He's a brooding, moody, awkward teenager with 2 left feet on the dance floor, although Doc is waiting for the spare parts to come in any day now. ToJu isn't exactly thrilled with the idea of continuing in the tradition of working in the family business. Jr. aspires to some day become a Broadway song and dance man, or a game show host, depending on how he does on the S.A.T.'s. Tony Jr. has seen The Rocky Horror Picture Show 1426 times.
Debbie is the perfect child...if by chance you wanted to raise a twisted, sadistic hellian. She can be kept busy for hours with an Easy-Bake Oven and the family's (soon to be former) pet. Debbie resents Tony Jr., feeling that he recieves special treatment cause he is a boy. She is a bit of a social problem and doesn't work well with others. She's been thrown out of; The Brownies, The Girl Scouts, the 4H Club, The Hell's Angels and the Masons...she plays a might rough. 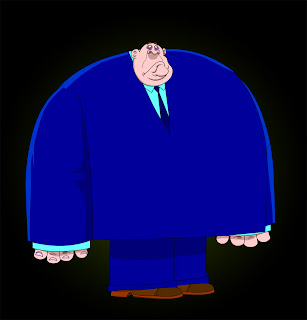 Lug was the former Detective Sgt. Luigi Wonderoni, who now serves as the families zombie muscle. Lug is a man of few words (if any), who acts chiefly as Doc and Tony Frankenello's trusted, stoic, irreplaceable, immovable body guard who would do just about anything for them. Lug has a sweet disposition and likes to spend his "off" hours by sitting quietly and staring blankly at nothing. Come to think of it, he does that during his "on" hours. Lug is very tough to buy clothes for, cause he is a size Rhode Island.
Posted by 4 Eyed Animation Projects at 11:01 AM No comments: 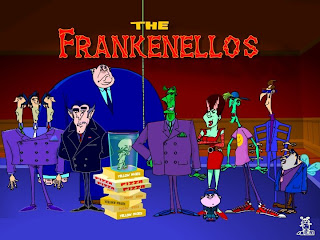 Posted by 4 Eyed Animation Projects at 6:33 PM No comments: